When it comes to executives on Twitter, there’s perhaps no one more intriguing than Elon Musk.

Space travel, conceptual telepathy, and memes using mice as metaphors for life; Musk’s tweets have a wide range. In between his tweets about college homework and Polynesian elevator music, you’ll see updates about Tesla.

JESUS @Tesla and @elonmusk just putting their hands in our wallets at this point pic.twitter.com/q5KB1S9ZRh

When you talk about Tesla, you’ll undoubtedly associate the brand with Elon Musk. Not everybody has billions of dollars to shoot astronauts to the space station, create self-driving tunnel networks or sell flamethrowers. But every executive can take away some lessons from the illustrious Elon Musk.

Why is Elon Musk’s social media influence so strong?

Twitter CEO Jack Dorsey once tweeted that Elon Musk is the most exciting and influential leader on the social platform. “He’s focused on solving existential problems and sharing his thinking openly. I respect that a lot, and all the ups and downs that come with it,” he wrote.

Elon Musk’s social media presence is so strong because he is unabashedly authentic, engaging, and fun. Plus, Musk adds in controversy to keep conversations orbiting around him. He’s unafraid to have a voice on social media despite the scrutiny from customers, naysayers and legal entities.

He does the outrageous and doesn’t shy away from tension.

One of the foundations of successful marketing is excellent storytelling. In every good story, there is tension. Elon Musk is not afraid of controversy. He has gotten into legal spats with the U.S. Securities and Exchange Commission (SEC) numerous times and has referred to it as the Shortseller Enrichment Commission on Twitter.

He jokes about his team wanting him not to post all the content he wants to. (Note: In ten minutes, Musk received nearly twenty-one thousand likes for his post and hundreds of comments).

You don’t listen to Musk on LinkedIn webinars. You watch him on Joe Rogan’s podcast. He seems less concerned about traditional forms of marketing, and more focused on promoting things he’s passionate about through PR (good or bad) and engaging with his fans on Twitter.

Despite the controversy, he’s got the ‘likeability’ factor.

Elon Musk is referred to as the ‘real-life Tony Stark,’ but in reality, it’s the other way around. The fictional character Tony Stark was heavily influenced by ‘real-life Elon Musk.’

If you go through Youtube videos featuring Musk, you’ll find an involved person who has brokenness, spends big money and openly shares his fears of the technology he is advancing.

Though his tweets and endeavors are exquisite, his presence in videos shows a surprisingly calm, controlled, intelligent, and (arguably) humble person that ultimately cares about humanity.

I like to see Elon surrounded by so many people and especially young people. They understand who he is and what he is doing for all of humanity. #TeslaGermany

Elon Musk is the face of Tesla, and he’s built a fandom around his brand.

How Elon’s presence impacts Tesla in a positive way

The numbers don’t lie. Tesla famously has a “zero” dollar marketing budget. Yet this seventeen-year-old car company became the most valuable automotive company globally in the summer of 2020—worth roughly $279 billion, which is four times the combined value of his closest competitors, General Motors and Ford Motor.

In 2020, Tesla will deliver 500,000 cars despite the economic recession and has been profitable three quarters in a row.

How did Tesla become the most valuable car company? Tesla creates new, innovative products—but when it comes to marketing strategy, most of the credit belongs to Elon Musk. He is such a fascinating public figure. Though Tesla used several marketing strategies (like a strong referral program), much of its success comes from Musk’s use of social media. 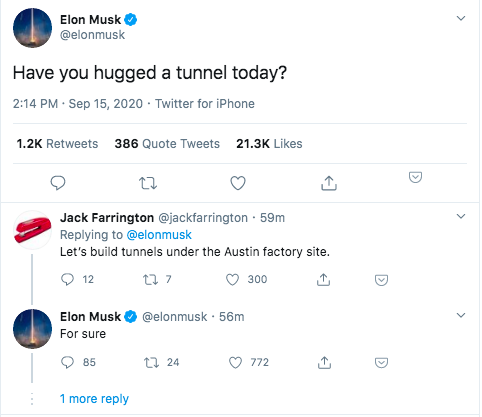 Tesla Model S & X have hospital-grade (HEPA) air filters. 3 & Y are really good too. This has a big effect on health. https://t.co/48s5D3IfWs

This filter post is relevant considering the fires were making air quality terrible throughout California, Oregon and Washington.

Even when Musk experiences setbacks (like the time the lead designer threw metal balls through the Cybertruck’s “bulletproof” windows), Musk still comes out on top. There are rumored to be 250k preorders (which he hinted at with a simple tweet: 250k).

What secrets can executives steal from Tesla and Elon’s success?

You don’t have to be one of the wealthiest people in the world or have the most innovative products to be real. B2C brands typically have a fun perception—but lately, B2B companies are becoming more human in their language and tone.

Amid COVID-19 especially, when professionals started working remotely, B2B social media usage became more open to posts about family or personal thoughts and beliefs. The 2020 Global Web Index reporting an increased social media usage for professionals, with 15% of business decision-makers spending more time on social media. Your buyers are humans, too, after all, and they want to feel an emotional connection with your brand, whether they’re in the B2C or B2B space.

2.  Turn your customers into fans—and let them speak for you.

Your customers are talking about you, and they play a pivotal role in shaping your brand perception. Elon Musk recognizes this and uses user-generated content created by customers as part of his social media strategy. He retweets his fan’s videos consistently. Sharing third-party content or user-generated content makes your social media feed more exciting and creates an intimate relationship with loyal customers.

3. Engage with your fans on social media, quickly.

Elon Musk is amazingly responsive to people who tweet him—like the time a customer asked for Tesla to create ‘dog mode,’ which Musk replied yes and followed through on his tweet. 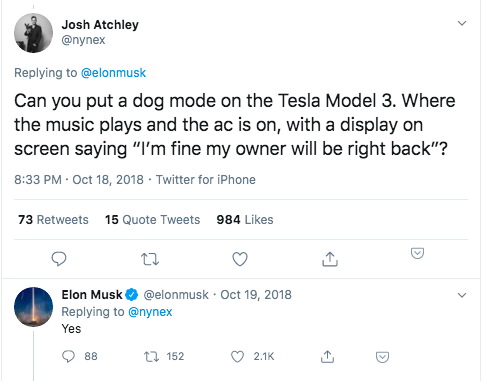 Elon Musk isn’t just on Twitter. His presence on YouTube is abundant, and he’s fascinating to watch. He commands a strong public presence and whenever he’s mentioned in the news, Tesla’s brand awareness takes off.

If you get the chance to participate in a webinar, podcast, or public speaking engagement, embrace it. But don’t just leave it there: use those interviews to build future content for your own social media accounts.

5. Always remember your why.

When Musk isn’t playing with flamethrowers, launching things into space, or expanding into neurotechnology, he consistently brings his endeavors back to what he cares about, which often involves respecting the environment, constant learning, and wellbeing of humanity.

6. Step outside your comfort zone.

If you take a few risks, you will earn a little reward. Musk has gotten himself with the SEC and has had bad press, but he’s still one of the most influential men in the world. He wouldn’t have gotten there if he had taken a conventional path. Not every executive leader has the comfort level to do what Musk does and that’s okay. First, crawl and then run when it comes to social media.

Not every company has grown as fast as Tesla. And not everybody has the flair of Elon Musk. But as an executive, you must be present on social media. When you’re authentic, active and responsive to your audience, your brand will benefit. The countless benefits aren’t just for executives, a strong social media presence can positively impact your brand awareness and perception. 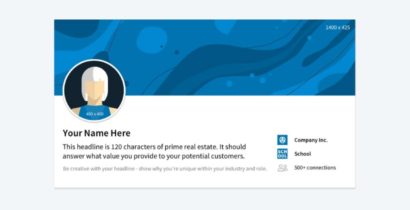 12 Steps to Optimize Your LinkedIn Profile and Professional Brand

To help you build the perfect LinkedIn profile, we scoured… 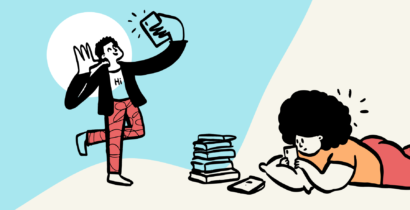 How Employees are Leveraging TikTok for Careers

We analyzed search trend data around career-focused content areas on… 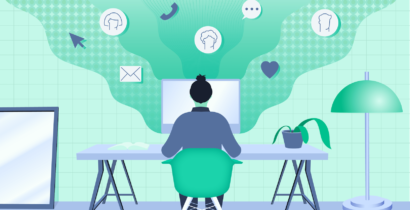